From the use of certain drugs, man begins his journey on the razor's edge. Of course, quit addiction is possible at any time, but what comes next is an addict in his addiction, the harder it. In this article we will talk about the dangers, which brings addiction man.

The first stage of addiction 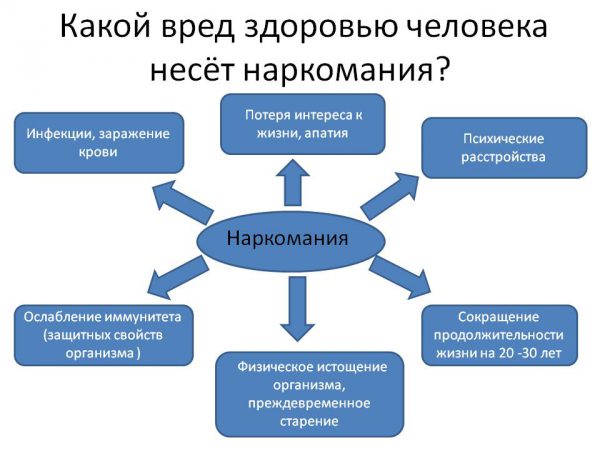 Starting to use drugs, many people think, what people don't see anything, and no one will suspect them based on. This error. Literally after the first sample in the human body begin to change, which affect human behavior. So even the first stage of drug addiction, when a person resorts to the help of drugs only from time to time, already bears the danger to the health and psyche. Here is what is the consequence of the disease to humans:

Changes in mood. The first dose will elevate man to heaven. If it's a weed, then comes a feeling of relaxation, stronger acid or ecstasy make the world visually more voluminous, create incredible audio and video effects. After, as the buzz will be, most feel a slightly unpleasant feeling of desolation and a desire to repeat the experiment. At this point, half the people refusing to continue the experiments, the other half decides, that nothing bad will happen, if you try again. Choosing the second path, people actually signed his own death warrant. The first dose does not cause irreversible changes, but every next try drugs violate the natural process of biochemical processes in the brain. What this means? After the first three or four times the use of narcotic substances the person experiences a strange change in mood, which changes, like the color of chameleon. Even without consuming the dose, a person can feel a sudden burst of energy, which is then abruptly replaced by apathy or depression. This is not considered by people seriously, because the mood seems to be something ephemeral.

Changes in appearance. In the first stage, changes in the appearance of a drug addict can be almost invisible. Man still in control of himself, therefore, the care can not forget only in periods of apathy, response caused by reactions to drugs.

The second stage of addiction, the harm to the body

In the second stage the person already consciously to drug use. Previously, he says to himself, that taking drugs is just a experiments, now he's looking to score, because it feels dependence. 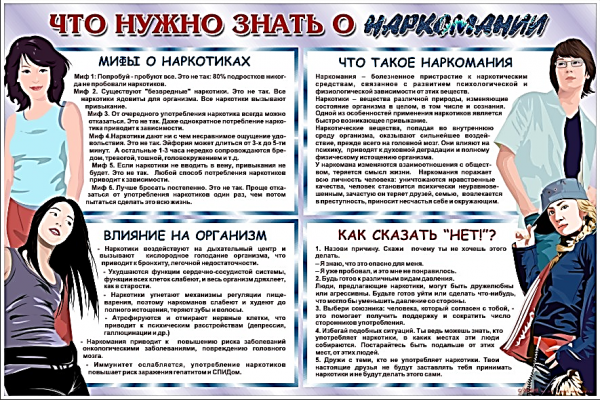 The emergence of physical dependence is one of the most serious dangers from drug use in the second stage of the disease. People already feeling the withdrawal, if you do not accept a drug with some regularity. Breaking (withdrawal syndrome) is manifested in a shiver, dizziness, pain in muscles and joints, nausea. It doesn't matter, which drug the person is addicted to weed, or more severe "tablets" with opium, morphine or something. Any drug is addictive and affection, that bring the pain.

Psychological craving – this is one of the indications, that drugs have harmed the body. Even if the addict is not experiencing physical discomfort, associated with the absence of the drug, he just wants to get a dose, in order to improve their attitude.

The destruction of the liver – after two or three months after the occasional admission of drug the liver the patient is starting to deteriorate. Any drug is toxic (this is especially true of synthetics – such chemicals are very much), and liver first tries to fight off poisonous substances, remove them from the body. But the flow of poison is not reduced, bring it is becoming increasingly difficult, and because the liver starts to hurt. At this stage, maybe to the beginning of cirrhosis, to develop rapidly and inexorably.

Disease of internal organs. Because the body is experiencing toxic effects of the toxins, who can't get liver, then other organs begin to "act up". Dependent may not yet feel this, so the disease is just beginning.

The third stage, as a rule, is the final dependent. At this stage, the person is stagnant until the complete destruction and dies. The dangers of drug abuse manifests itself in the fullest way and people like living zombies.

The danger of drugs to the body. People, as a rule, has a whole bunch of diseases of all internal organs. Poorly functioning or no longer working life support system, organs shutting down one by one. The appearance gives the patient a man looks older by a dozen years away from his real appearance, has festering wounds on the skin, bad hair, hemp, the remaining teeth, broken nails, the veins are hidden deep under the skin. In addition, addicts sin, promiscuity and the, drug use, not worrying about your health. Dependent people are carriers of AIDS, countless sexually transmitted diseases.

Bump for mental health. Man loses all moral principles and spiritual values, he's not thinking about anything, in addition to its survival. Drugs have long been not bring buzz, are a simple way to reduce the agony and get rid withdrawal. In the third stage, almost all addicts have repeatedly broken the law – stealing, attacks. Dependent can also kill a man for money, absolutely not aware of the fact, what he's doing. These sick people are the most dangerous to society.

In addition, disappears human form, falls intelligence, personality is rapidly degraded. Be only initial desire was to find the dose, to find money on the corner. Addicts are not even interested in food, therefore, most such people are exhausted externally.

The danger of drug abuse to social relationships. This dependent have no work and family. Drugs completely destroy a person's life, deleting all contacts, friendships and love Affairs. The addict leaves the family, since it can not find a common language with family and friends. The work addict also loses, because who needs people, who absolutely can't control?

The course of the disease can be divided into several stages, each of which have a great harm for the individual. The greatest harm to the addict brings, of course, the third stage, which ends with the death of the dependent person.

Liked the article? Here you can share with your friends in social. networks and evaluate this record “Danger of addiction – what it brings harm to human life?”: