Going to relax in other countries, travelers always dream to bring back interesting Souvenirs for their loved ones. Special attention is usually deserved alcoholic beverages. And the leader among many is vodka with a snake from China. Time to find out the main advantages, and the main thing to know is it safe, as many believe. 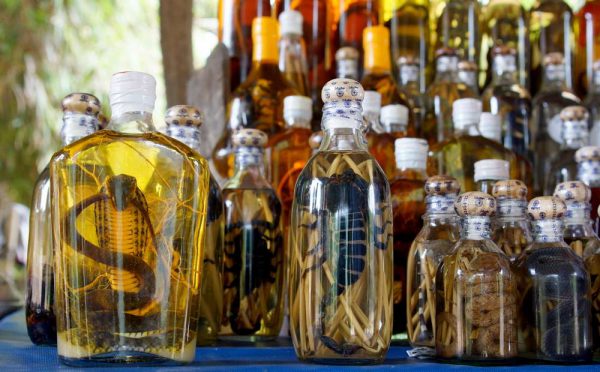 Vodka with a snake has a long history. To reveal the exact date of its creation impossible. After voluntarily pour Cobra with alcohol and drink the resulting drink is quite risky. So many legends refer to the fact, that such an experiment happened by accident.

It turns out, the poor animal itself was drowned in a vessel of wine, then unsuspecting people drank the resulting infusion. The result justified all expectations, changed the taste and even properties.

There is another local legend. The girl suffering from leprosy were also able to be healed, drinking alcohol content of a poisonous creature. From that moment, many people began to consider, vodka with a snake inside is able to treat even the most neglected diseases.

If you delve much earlier, you can find older written sources, confirming the presence of the coil. Thus, the first mention of it appeared in the II century BC. Today vodka with snakes is also in demand among local residents, and most importantly tourists, always want to buy a bottle. Although before you make such purchase is necessary to clarify the rules of customs. Some countries prohibit the entry or export of such. 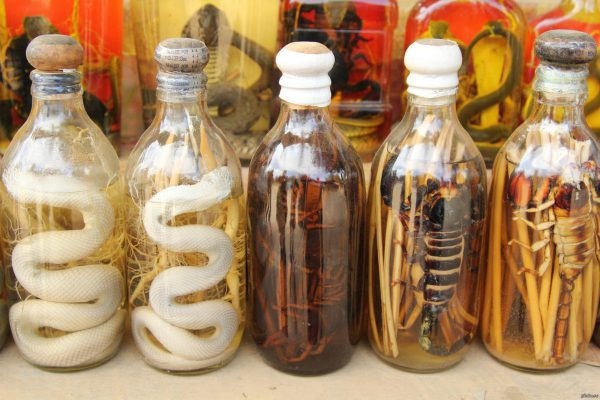 Chinese vodka with a snake – universal. Unusual appearance, that it can be used as gift and unique useful properties. However, it must be consumed properly, otherwise the beneficial effects will not be. Drink vodka with a snake, you need small portions, about 50 ml daily.

According to traditional Chinese medical, vodka with a snake inside can help in the following diseases:

This is just a small list of diseases. It is important to note, vodka with a snake is often used as a tonic, rejuvenator. It also increases efficiency, strengthens the immune system.

However, the self is always able to provoke undesirable consequences. Therefore, before applying you should consult with a specialist.

Vodka with a snake is a tincture, made of poisonous reptiles. Usually make it at home. Many families have proven over the years the recipe, which is actively inherited. So today there are many different ways of cooking. Although each of them have common features.

Use for cooking live snake, which is kept in a separate container for a couple of months. This allows the animal to get rid of excrement. After the required time, soak it in strong alcohol and clog.

This product can not be open sooner than one year. Usually the locals use rice vodka, thanks to her, the product gets a special flavor, delicate taste. Today these customs have changed a little.

Manufacturers often use plain alcohol or vodka. To give the drink a pleasant aroma, to the recipe add aromatic herbs. Chinese vodka with a snake and ginseng special demand.

A unique technique of creating the drink provides the necessary positive qualities. The reason for all the clogging of the animal alive. Because of this, her body stored the nutrients. Of course, allocated and negative components = bile, poison. However, due to the presence of alcohol, their action is completely neutralized.

Is the use of reusable creeping creatures. When the tincture is consumed, capacity again, you can fill with alcohol and leave to infuse for a few months. On the verified data known, a similar procedure is repeated until a valid 5 times.

There are other methods of cooking. For example, to create a tincture must be used exclusively inside, the bile and the blood of the serpent. The resulting product, has a pleasant taste, aroma.

A traditional vodka with a snake includes the following components:

This vodka with a snake from China not do one animal. Later 5 days in a jar with a Cobra placed Scorpion. The appearance of such a product is unique, a useful property of increased. To insist it must be at least six months. Sometimes manufacturers instead of one large reptiles use several small.

Vietnamese vodka with a snake

Another well-known, exotic drink. The people often prefer rum with Cobra. The resulting product has a unique taste, the aroma and aftertaste.

However, it is recommended to buy exclusively through pharmacies. Rum used snake venom, grass, spices, insects, Salamander. Vietnam vodka with snake also has a number of positive properties. 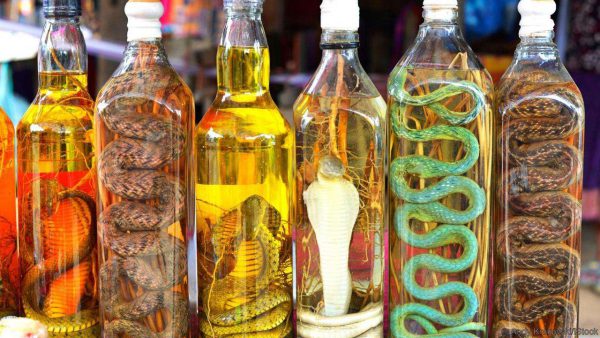 The dangers of using

To purchase the product must be exclusively tested individuals, otherwise there is a high probability to cause your health serious damage.

The death of the snake takes a long time. Therefore, when using low-quality alcohol or a short time infusion reptile is able to fall into a special long who. In practice there are cases, when during the consumption of Souvenirs animal was alive, and bites it provoked death.

Ignoring the accurate processing technology beverage stores snake venom. By consuming increases the likelihood of harm to your body.

Thus, each buyer must carefully approach the selection of goods. Otherwise, the original purchase Souvenirs may end up is not the most positive way.

Liked the article? Here you can share with your friends in social. networks and evaluate this record “East vodka-zmiivka can be dangerous”: