We all know, what a serious blow to the body causes the alcohol. It violates the function of internal organs, that leads to the development of many serious diseases. Alcoholic beverages also act negatively on the brain. Ethyl alcohol, getting inside, destroys its structure, affects the nervous system. However, it is believed – alcohol brings positive action – dilates blood vessels, normalizes blood pressure. So, where is the truth and what we should believe, it is time to understand more in this matter. 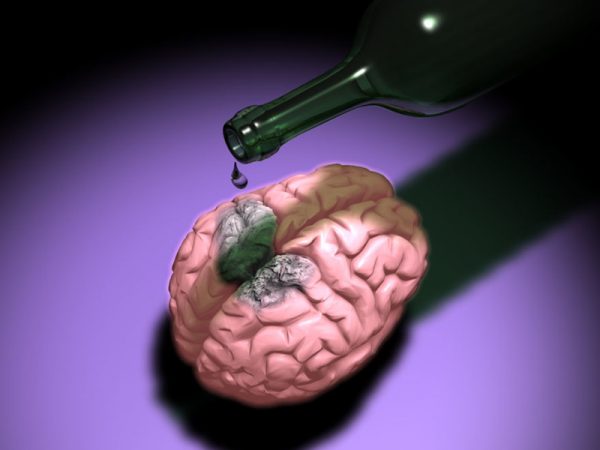 To get ethyl alcohol sufficient 15 minutes. The first blow on themselves takes stomach, half of the dose is absorbed here. Further 2 hours, toxic substances are sent to wander for all bodies, inflicting harmful effect. It easily penetrates into the cells, capillaries.

In the last century had made an important discovery, proving the harmful effects of alcohol on blood vessels, capillaries. It turns out, this causes their deformation, which leads to twisting.

If alcohol is supplied enough, the cells can maintain their function, in the process, negative effects can not be avoided. Happens the clogging of capillaries, which will increase blood viscosity, and this is the first stage of oxygen starvation of the brain.

Ethanol also can adversely affect the nervous system, share the three stages of defeat. First, it improves mood, the person becomes sociable, lost complexes, but soon the situation is compounded by.

Instead of euphoria comes depression, which is accompanied by an increase in the concentration of substances in the blood. Starts the second stage – nervous system reduces the activity, there is a feeling of nausea, dizziness, drowsiness, possible loss of consciousness. If time does not help, there will come a third stage, which may be a result of the death. The cause of death will be a loss of reflexes, swelling of the brain, the onset of coma.

In 19 century after a series of experiments, scientists have concluded – ethanol can cause an irreversible effect, even the fetus in the womb of drunk mother. If she doesn't stop drinking, the child will be "fetal alcohol syndrome", consequences of CNS and other disorders.

Methyl alcohol is a poison for the brain

Ethyl alcohol is not the only pest among their representatives. Methyl also can cause serious complications. It is used in technical purposes, but even so, cases of poisoning with them is not uncommon. When ingested, it can cause terrible damage to the Central nervous system, to break optic nerves, cause of death. To be fatal enough 70 ml of methanol.

Opinion, what alcohol causes the use of wrong. Do allow its use, but only in small doses. Otherwise there will be increasing pressure, what is called a favorable outcome can not be sure. It is worth noting, the importance of the amount of alcohol consumed, the quality, the frequency and age used. If one is to drink a glass of vodka the norm, but from another it can be bad. 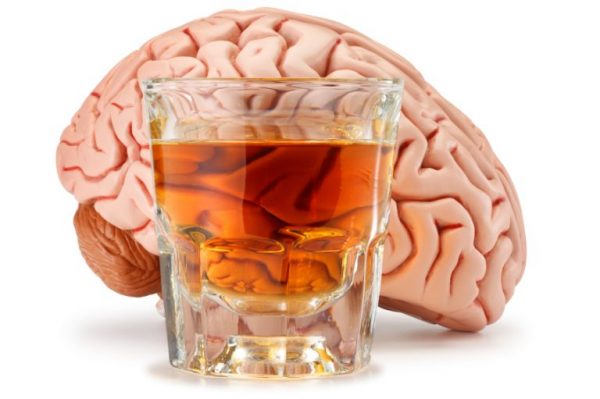 Alcohol causes as the General strike around the brain, and parts.

Cells of the hypothalamus in the body of a healthy person responsible for the production of the hormone vasopressin. It is able to regulate the amount of fluid removal from the kidney. If everything goes well, the process proceeds smoothly. It is worth noting, that vasopressin can also be responsible for intellectual processes. 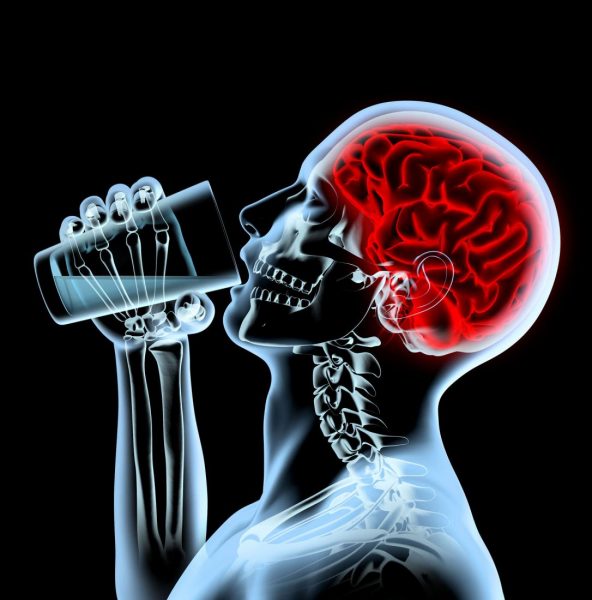 Thus, his poor performance may Pref
result in the loss of learning ability, cause the development of disorders in family relations and even lead to aggressive human behavior. Scientists still do not know yet, how, this hormone is able to exert such actions, but the fact remains. Without his normal production, to avoid serious problems will not work.

The defeat of the nuclei of the hypothalamus ethanol causes the development of diabetes insipidus. This is a serious disease, which is characterized by the release of large amounts of urine daily, dehydration, the defeat of intracranial pressure.

The brain suffers greatly from the action of alcoholic beverages, but the most vulnerable to ethanol is considered to be the cerebellum. It is important to note this division is responsible for motor field. The movement of the body, muscles and balance depends on it. That is why the strong intoxicated people begin to lose balance. But if we are talking about chronic alcoholism, the situation only escalates. The alcoholic is destroyed the connection between the cerebellum and the frontal lobes.

Permissible norm for consumption is considered to be 210 ml of ethanol per week for men, and 140 ml – women. Otherwise increases the probability to get a serious disruption of the functioning of the body. Alcohol can kill brain cells, can not restore them. But they are responsible for the existence of. Their heavy attacks may cause instant death.

The effect of alcohol on the human brain always negative. If you do not want to suffer from early memory loss, undue dizziness and other strange symptoms, it should abandon the use of alcoholic beverages

Liked the article? Here you can share with your friends in social. networks and evaluate this record “The effect of alcohol on the human brain”: